Two possibilities are available: a visit to the bay of Marseille simple or a visit of the harbor with a stopover at the island of If to visit the mythical Château d'If. It's up to you to choose the option you like most before boarding. 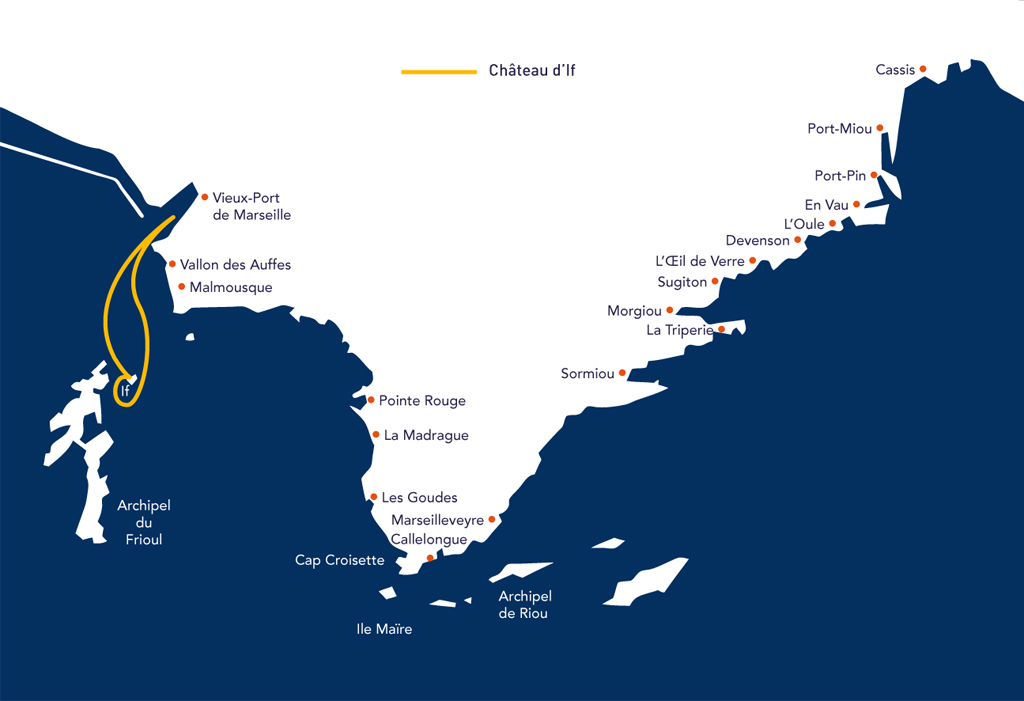 This is the emblematic place of Marseille: the Old Port !
The first traces of colonization of Massalia (Marseille) are in the Vieux Port… the biggest Calanque in Provence!
Its original name “Lacydon” is in homage to a ancient goddess Ligure. It's here, 26 centuries ago, that the Phoceens landed from Asia Minor (Turkey), to establish a maritime colony. It would soon become the meeting place of all the civilizations throughout the Mediterranean.

Old Port : the beating heart of the Marseille

In history, the Vieux Port of Marseille is no other than the starting point for the creation of the city. During Antiquity and the Middle Ages, the Greek city that was then called Massalia (then Massilia during the Roman era) had built its city from this port.
The latter was surrounded by two forts still present now namely Fort Saint Nicolas and Fort Saint-Jean.
Formerly the economic center of Marseille, the Vieux Port is today a marina but also and especially the symbol of the city. A veritable gateway to the Mediterranea, it's at this magical and tourist place that shipping companies like Croisières Marseille Calanques have moored their cruise ships.
And it's isn't by chance: the location of the Vieux Port makes it easy to reach the coves of the coast and to walk in the bay of Marseille to discover the city seen from the sea.

Embark on a visit to the bay of Marseille: get more info now! 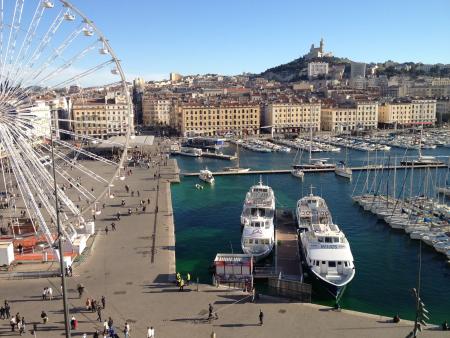 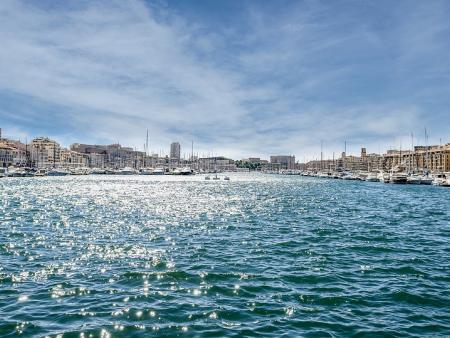 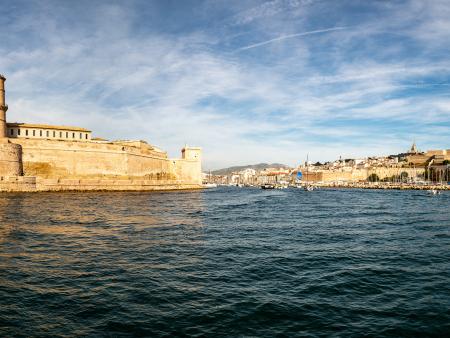 Behind the ledge you can see the famous Vallon des Auffes.
This small natural cove historically served as a shelter for fishermen who, little by little, colonized the surrounding cliffs.
The houses are typical of the Mediterranean, colorful and over lapping each other. Local fishermen and their families still operate their small fishing businesses. Today the area is also well known for its gastronomic restaurants serving the famous Bouillabaisse (fish soup of Marseille).

Visit the Vallon des Auffes by the sea

Typical calanque of the bay, the Vallon des Auffes has sheltered over the centuries fishermen from Genoa with their colorful boats, which is called here "Le Pointu".
The Vallon des Auffes is typical of the life of Marseille: quiet, peaceful and authentic, the Vallon located in the district of Endoume between the beach of Catalan and Malmousque Creek behind the large arches of the viaduct spanning the port is the nest of fishing huts. This is what characterizes Vallon the best: fishing.
Drawing from the alfa (in Provençal auffo) which refers to the grass plants used to make the ropes of the ships and the fishing nets, the Vallon des Auffes is a magic place from which you will return with good memories with sure shots!
Lovers of good flesh? The Vallon des Auffes is full of gourmet restaurants such as the famous "Chez Fonfon" which offers a delicious bouillabaisse with fish caught during the day !.

We offer you the possibility to go inside this fisherman port with our boats, as part of our privatization activity. 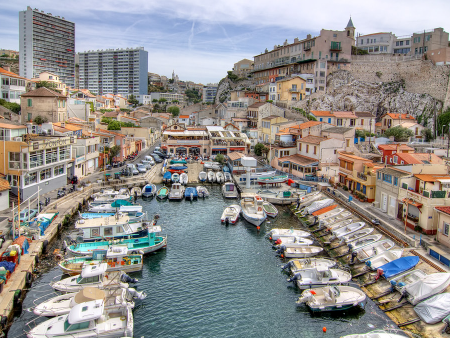 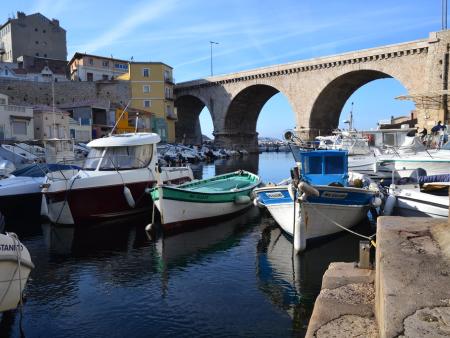 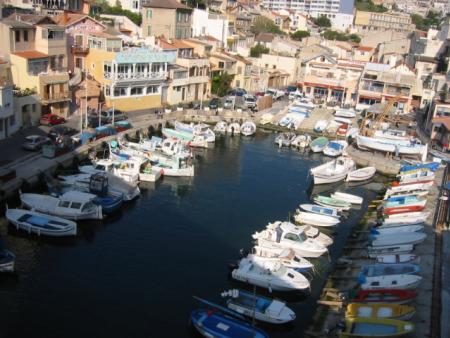 Malmousque is a very picturesque cove with beautiful Provencal houses surrounding a small port. The cove of Malmousque, meanwhile, is the cove located inside the creek, on the peninsula. It has a bathing area to catch rocks or concrete pontoon.
Quaint, this creek Marseille is a treasure of old Marseille and it was therefore unthinkable not to spend during the nautical visit of the Bay of Marseille!

Have your feet in the water in downtown Marseille ? It's possible in the cove of Malmousque! On the peninsula where the sheltered cove is, bathers are welcome. A small pebble beach allows you to enjoy a swim in the clear blue of the Mediterranean.
On the harbor side, it is the fishermen and the sharp ones who, like in the Vallon des Auffes, enliven the place with their round trips.
While strolling along the coast of Malmousque by boat, magical places su succeed: enjoy a breathtaking view of the island of Degaby, the archipelago of Endoume or the most prestigious restaurants of Marseille as the Petit Nice Passédat overlooking the beach of La Fausse Monnaie. 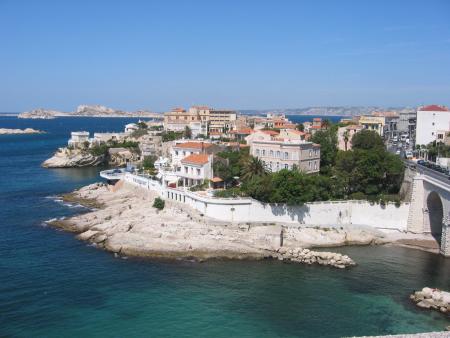 We are now in the middle of the natural bay of Marseille On your right is the archipelago of Frioul consisting of four main islands, of which the most famous is If… containing the castle in Alexandre Dumas’ famous novel The count of Monte Cristo.

History of If Castle's island

Although being a fictitious story, it contains some historical facts … the abbot Faria actually stayed there! This novel is the most read book in the world (after the Bible).
The Fort was built in the 16th century when King François 1st realised the strategic importance of this place to defend Marseille.
Having known no major battle, it was converted into a state prison holding (at different periods) protestants and antimonarchists. The castle of If remained a prison up until the end of the 19th century, before being classified a protected monument in 1926. 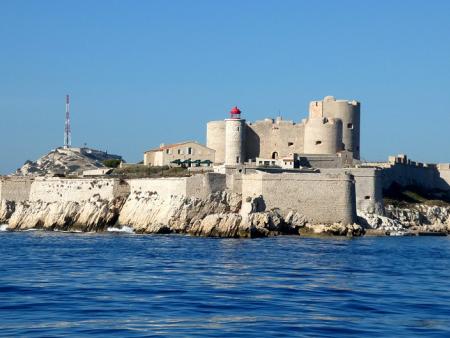 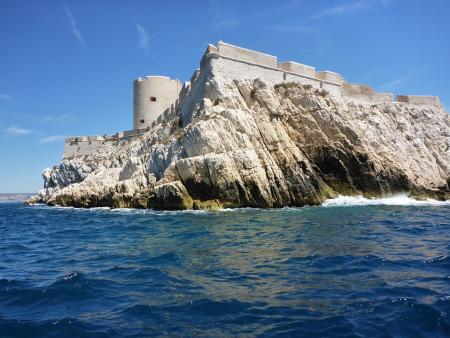 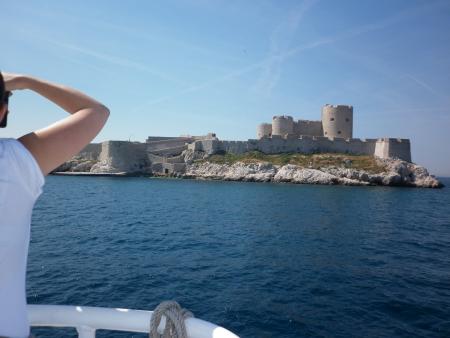 Both islands, Pomègues and Ratonneau were connected by a dike in 1825. In the 17th century it was used to put ship’s crew in quarantine to protect the city from The Plague and Yellow Fever, as well as military posts to protect the coast from invasions from the sea.
The archipelago has small beaches for those wanting to escape the crowds. However, the main feature of these islands is the variety of coves, its rich sea life and various wrecks …attracting divers from around the world.

The islands of the Frioul archipelago have often been invested in view of their strategic position in the bay of Marseille. As a result, they have long been used as advanced defenses like the Château d'If.
Until 1975, the islands of the archipelago of Frioul were prohibited to the public and priopriety of the National Defense. It was only after the intervention of the former mayor of Marseille Gaston Deferre, that Frioul was downgraded to a simple marina and that houses and businesses were built on the island.
All the islands that make up the archipelago were then ceded to the city only in 1995.
On the environment side, human modifications have changed the face of this archipelago of Marseille. However, endemic species typical of the Marseille coast are still present as well as rare floral species. In contrast, the fauna of Frioul is impoverished: many animals have deserted the place and only seabirds still predominantly populate the islands.
Today, the government has helped to place the Frioul islands site in the European Natura 2000 network to preserve the natural space as much as possible.

Discover the island of Friuli by privatized boat ! 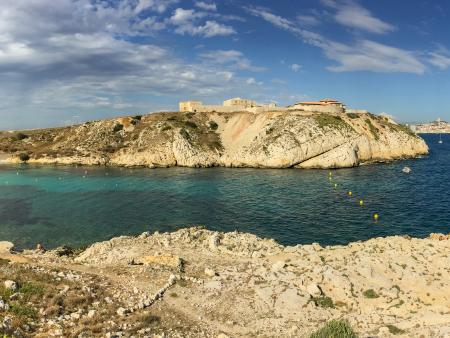 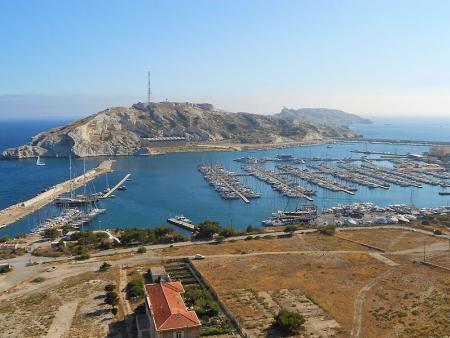 X
USE OF COOKIES
By continuing your visit to this website, you accept the use of cookies to offer services and offers tailored to your interests.
More / Accept